Thorgal and the Atlas of Adventures 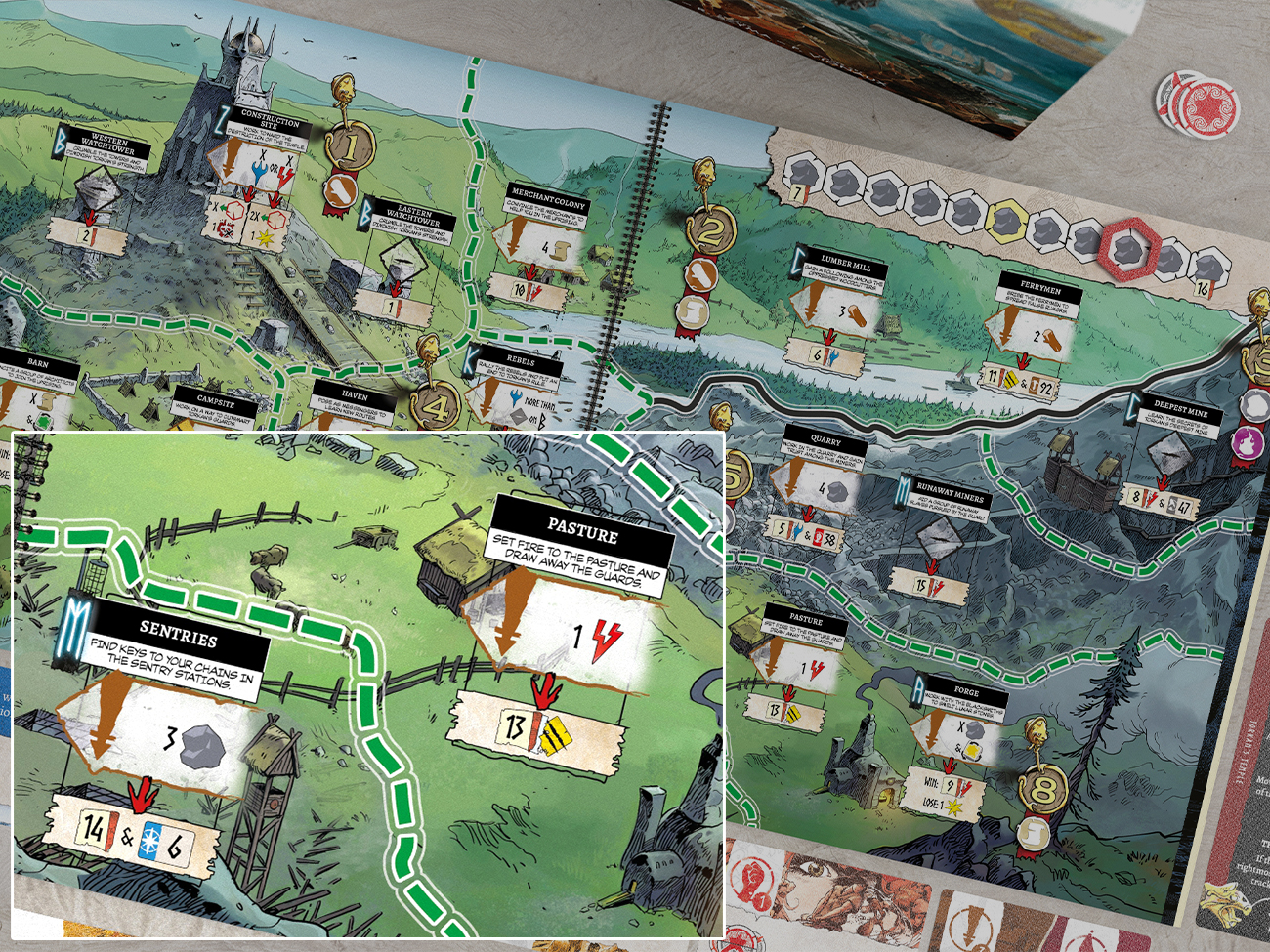 I remember my first Forgotten Waters playthrough. My hands were trembling from excitement, I couldn’t sit down, I was standing at the table, and the designer in me was over the moon. The Location Book—a bound set of adventures we experience during the game—opened an ocean of possibilities before us. On page 2, we’re at the Port, but then we set sail, turn to page 8, the Archipelago, and after a few rounds we end up in the Bay with a secret cave, and if there’s a cave, we move to page 18, where we see a mysterious…
Every page is a new world. Every page is a new mini set of rules, a new challenge, a new adventure. Forgotten Waters have unhinged the door to a chamber containing dozens of new game ideas.
Since the very beginning, since the first prototype, we knew that we’d design a game with an atlas of adventure. Our dev team did their homework and played every possible game with that mechanic, though we admit that there are not many similar games yet. It’s just the beginning of a revolution, a new wave of ideas triggered by Sleeping Gods, Jaws of the Lion, and Forgotten Waters.
We wrote down everything we liked about these games, as well as everything that didn’t fit our vision. Slowly, day after day, week after week, we were building our prototype. We wanted the map to contain mini-stories, side quests, and bits of plots, just like in Sleeping Gods. We also wanted every board to have unique, dedicated actions, just like in Forgotten Waters.
Three grains of persistence, a little bit of talent, hundreds of vials of playtest hours, maybe two or three leaves from the magic tree of brilliant ideas, and voila: we have something new. Thorgal: The Board Game.
***
Every scenario has a unique, dedicated map, and each map is divided into areas the characters will move between. In each area, players have several actions to choose from. As shown in the example above, in one of the areas we can torch a pasture, which will allow us to read paragraph 13 from the Book of Tales, and the icon next to the paragraph number indicates that it’s going to be Enemies-related (plot-wise, we can deduce that it’s going to be about the guards that will rush to extinguish the fire.)
Below the Pasture we can see a Sentries. If we collect enough rocks to get there, we’ll be able to search the chambers and find the keys to the chains that bind the prisoners. We’ll read paragraph 14 about what happened, and we’ll modify the sixth action card. I will write more about the action card modifications in the upcoming weeks. Now I will only say that during the game, players can modify the effects of actions available in the game. Modifying your action cards to achieve the strongest combo is a key element needed to succeed in the game.
By moving between areas of the map, collecting trophies and resources, and unlocking more actions and paragraphs, we will get closer to achieving the goal of the scenario. Every goal in the game can be achieved in different ways—there are many actions to choose from on every scenario board, and by choosing different actions we choose different strategies to achieve victory.
Similarly to Robinson Crusoe, every scenario in Thorgal can be played multiple times, especially since they’re not the easiest and the victory requires good planning and a little bit of luck. Moreover, every scenario accentuates different aspects of the game. There are fight-focused scenarios, exploration-driven scenarios, or scenarios that provide more interaction with the world.
The plot for every scenario was created by Rafał Szyma. That means every adventure of the game has not only interesting tactical choices and good gameplay but also an intriguing narrative set deeply in the Thorgal universe.
***
The names on the Thorgal game box are Kijanka, Maurycy, and Szyma. They created this amazing game. But we wouldn’t have Thorgal if it wasn’t for the works of Mr. Bistro, J. Arthur Ellis, Isaac Vega, Ryan Laukat, and many more.
We build on foundations set by our predecessors. We create new solutions thanks to the support of the creators who inspire us to push the boundaries. Our friends from the industry show us new directions and throw down new challenges. I’m grateful to be a part of this wonderful family.
You can learn more about Thorgal here!

First Martians: the one about psychology!

First Martians: will they differ?

5 most insignificant things about Imperial Settlers