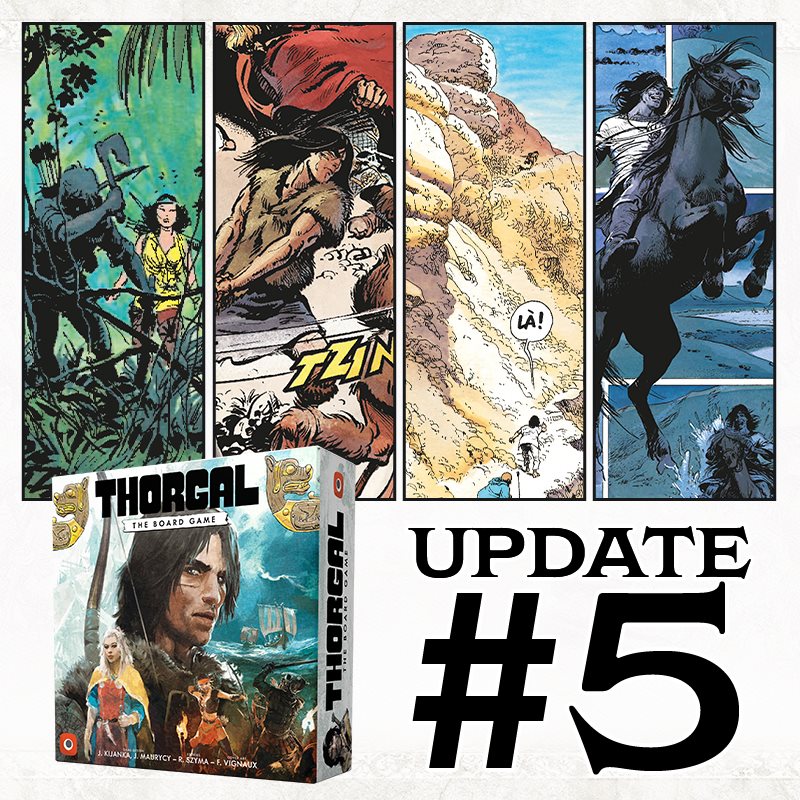 Does every board game have to be innovative? Should every designer try to include something in their game that the world of board games doesn’t know yet? Do players expect innovation when they buy a game?
I think not.
Stephen King has been preaching for years that writing books is a job like any other. He calls himself a craftsman. I myself believe that there are only a few geniuses, and outstanding designers, such as Garfield, Wursch, or Cathala. The rest of us must try as hard as we can to be the best in our craft. To be like Stephen King. That’s all it is.
When we were starting the work on Thorgal: the board game, we had no ambition to revolutionize the board game industry. We didn’t search for innovation. We didn’t take classic elements of mechanics and tried to break them, looking for a new approach and trying to impress reviewers at all costs.
On the contrary – we are making a classic, good adventure game. Let’s play as many games of this genre as we can, let’s see the strong points and weak points of the genre. Let’s try not to lose the first ones and avoid the second ones. We are Stephen King. We are making a good board game. That’s all it is.
And then something unexpected happened.
I don’t know if Janek was aware of what he was creating from the start. Whether he knew from the first sketch, during the first test, that this action mechanics was something absolutely unique. Whether it was that he laid these cards on the table and it just came out or whether it was the result of a few sleepless nights of contemplation.
Suffice it to say that when they invited me to the next test and told me that they had slightly changed the action system, their eyes were shining like a child who had found candy under the couch. They knew they had a real treasure in their hands.
They didn’t search for it, but it fell into their hands.
***
At first glance, the action system in Thorgal is based on well-known and popular worker placement mechanics. Players have four action pawns. In their turn, they place one of the pawns on the chosen action and take action.
Actions are usually printed on the board in games with worker placement mechanics. In Thorgal, we put them on cards. The game includes a deck of cards with all possible actions, and each scenario instructs players which cards to use in the particular game. This allows standard actions such as Movement, Trade, or Combat and specific, dedicated actions such as Sailing, Bargaining, or Climbing.
Action cards are placed next to the board in a row. The actions described on cards have different values, depending on the players’ previous actions taken. Most actions have a strength of 1 plus 1 for each pawn on the action cards to the left.
Look at this example:

If I place my pawn on the blue Movement action, I will move only two regions. There are no pawns to the left of it, so we resolve only the base value.
If I place my pawn on the grey Resource Gathering action, I will collect 1 resource and an additional one for each pawn to the left, a total of 3 resources.
Worker placement like you’ve never seen before. This is worker placement in which players are constantly talking, deciding what actions they want to take cause the order of actions taken and where we put our pawns matters a lot. This mechanism engages players and teaches them to plan. Those who think twice and plan their actions will get significantly more out of each action.
In one of the previous articles, I wrote that Thorgal: the board game is an interesting hybrid, dripping with theme and story, but also an interesting, original challenge for players who like euro games.
I hope you like this simple, clever mechanism, the rule that encourages players to discuss and plan together. And if you do, let me show you one more twist here.
In one of the previous articles, I mentioned that players would have the opportunity to upgrade actions. When doing this, they take a new Action card from the deck and replace it with the one already in the game. What is the purpose of this?
Each action card has its number. It determines the place in the line of cards. Imagine a situation where the Fight action card has 2. It is second from the left and, therefore, very weak. There are rarely any pawns to the left of it. Suddenly it is replaced with the Fight action card number 12, which lands at the end of the line, on the right.
Do you see how this changes the game? How suddenly this Fight becomes more powerful? And do you see that it carries further consequences? We strengthened Fight but weakened another action, right? Is it worth doing? When should it be done?
Conversations, debates, game tactics.
***
I believe in Stephen King. I believe in craftsmanship. In good, reliable work. But just as King occasionally finds a gem like Pet Sematary, so do we, game designers, sometimes find something exceptional. The action selection system in Thorgal: the board game is one of the cleverest and most interesting worker placements I have seen in games.
You will fall in love with it.
Learn more about the Thorgal: boardgame here!

It's so damn important

Every once in a while

I did it justice